Uniaxial stress is a form of loading in which the 11 (axial) component of stress is nonzero, while all other components of stress are zero.

Uniaxial strain is a form of loading in which the 11 (axial) component of strain is nonzero, while all other components of strain are zero.

For an isotropic material, axial loading (whether uniaxial stress or uniaxial strain) gives stress and strain matrices of the form

for uniaxial stress, whereas

for uniaxial strain. In either case, you can generate a plot of

Consider an isotropic linear-elastic (Hooke’s law) material, which is described in general by the following set of equations: 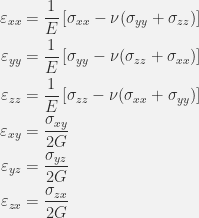 is Poisson’s ratio, and

is the shear modulus.  Be advised: you might need to make the following notation substitutions if you want these equations to look the same as they do in undergraduate textbooks:

, etc., with similar substitutions for the strains. Accordingly, under conditions of axial loading, the general Hooke’s law equations specialize to

For uniaxial stress, where

, these give the familiar formulas

For uniaxial strain, where

). This means that it is more difficult to achieve a given increment in strain under conditions of uniaxial strain, which is unsurprising in light of the fact that the the lateral confinement of uniaxial strain causes extra resistance to deformation.

is the density and

(which works only for uniaxial stress waves, such as on a thin bar, not uniaxial strain), (3) people use the bulk modulus

(which works only for inviscid materials like gasses, but not solids), (4) they apply a wave speed formula derived for isotropic materials inappropriately to layered material like geological deposits.

The distinction between uniaxial stress and uniaxial strain is even more dramatic when you compare the stress-strain predictions for a simple plasticity model, like von Mises theory shown below:

See below to understand that changing the plasticity model also produces significant changes in how the stress state moves through stress space. Below, instead of the non-moving von Mises cylinder, the yield surface is the classical “evolving teardrop” shape used in geomechanics. In that case, uniaxial stress states no longer get “stuck” but instead evolve from one part of the yield surface to another, though still in a radically different way than the motion of the stress state in uniaxial strain.

As a rule, material behavior in uniaxial stress is very different from that in uniaxial strain. Shown below, for example, are stress paths predicted by a geomechanics plasticity model showing very different trends in uniaxial stress in comparison to uniaxial strain. These plots depict a so-called meridional profile of stress space in which the ordinate is a measure of shear stress and the abscissa is a measure of pressure. The teardrop shape is the evolving yield surface according to this model, where the curved part of the surface at the right-hand-side represents the effect of pores. The rightward motion of this surface represents inelastic pore collapse. The other line in these plots is the evolving stress state.

In this plot and the one below, the abcissa is the first invariant of stress

, and the ordinate is the equivalent shear given in terms of the second stress invariant as

. Above, the black line represents an evolving stress state induced during uniaxial strain loading. The green (teardrop shaped) line is the evolving yield surface of a geomechanics model that is run with pressure-dependent strength (which is why the initial slope of the green line is positive) as well as kinematic hardening (which is why the green line moves upward) and porosity (which is why the green line has a cap at the right-hand-side allowing inelastic pore collapse). Rightward motion of the green yield represents the fact that increasingly large pressures are required to continue the process of pore collapse. Of particular note in this plot is that uniaxial strain loading provides lateral confinement that produces increasing pressures that bend the stress path to the right and furthermore keep the stress state always on the “cap” part of the green yield surface. Contrast these features with triaxial stress loading shown below, where the possibility of unlimited (outward moving) lateral strains can produce material dilatation even when all stresses are compressive.

Above, the evolving stress state (red) shows a hydrostatic leg where the path is horizontal followed by a triaxial leg in which lateral stress is held constant while the axial stress is increased. The teardrop-shaped yield surface (blue) evolves such that the cap moves outward during the initial hydrostatic leg to account for pore collapse. During the initial part of the triaxial compression phase, the stress state is initially still on the cap (where the outward normal to the yield surface points toward the right in the the compression direction). This particular model evolves the yield surface in such a way that the stress state eventually resides on a part of the yield surface where the outward normal points in towards the left, allowing this model to give very accurate predictions of dilatation in this mode of loading. It is unlikely, however, that this model would be predictive under a change in the loading trajectory. In particular, note that this model moves the cap continuously outward, which means that it predicts the unlikely result that dilatation would make the material stronger in hydrostatic compression. The CSM group is exploring alternative plasticity theories that will allow prediction of dilatation in triaxial compression without anomalous hydrostatic strengthening.

Summary: This post has examined Hooke’s law to demonstrate that uniaxial strain provides confinement that makes the slope of the axial stress-strain line higher than it is for uniaxial stress. This also implies that acoustic waves travel faster than the often misquoted thin-rod speed given by

. Images were also shown for a geomechanics model subjected to conditions of constant lateral strain (producing a bend in the stress path towards increasing pressures) and conditions of constant lateral stress (producing a straight path through meridional stress space that eventually allows the stress to reach a dilatational portion of the yield surface).