PUBLICATION: BOOK ON ROTATION IS OUT!
On Amazon, just search for “Brannon rotation”
or see publisher link to the book.

This animation shows three ways to visualize a rotation:

The central image shows an intuitive visualization of all faces of the cube at least once, which would be nice if you wanted to showcase an object (like a new design for an automobile) in a way that shows it from multiple perspectives.

Lambert mapping of a sphere to a disk.  The area of each grid cell is constant. 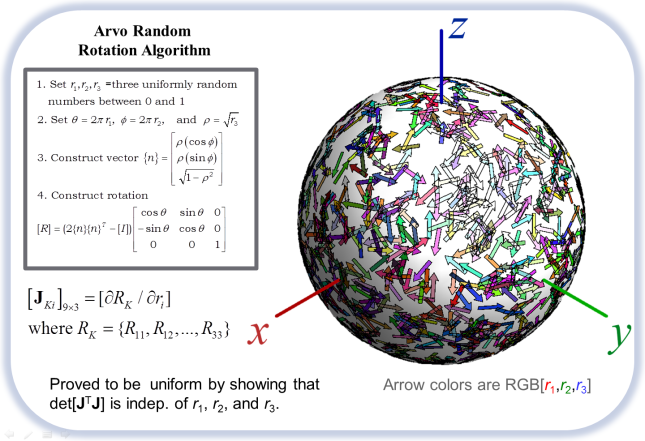 The Mathematica notebook that was used to generate the rotation visualization may be downloaded here: VisualizingRotations_ShowcasingArvoRandomRotation.nb.

The images and source code in this post may be used freely if this website is credited as follows:     Brannon, R.M. (2013) https://csmbrannon.net/2013/11/25/visualization-of-rotation/.  It would be really great if someone would convert this Mathematica notebook to a Wolfram Demonstration.  I don’t have time to do it.

3 thoughts on “Visualization of rotation”