The above animation aims to be a slight improvement over one on Wikipedia, which (incidentally) does not correctly describe the velocity field that it is depicting. The Wikipedia image doesn’t show a checkerboard of moving material, nor does it have a nice depiction of streamlines.

Before describing this animation, it might be helpful to look at a simpler motion (a rolling body) in order to review the difference between streamlines, streaklines, and pathlines. Consider a simple rigid body consisting of a disk of small radius (shown in gray below) along which it rolls along a tabletop, along with a larger-radius extension of the body (shown in color below) which can dip down below the table surface (as if there is a slot cut into the table so that part of the body rolls under it).

STREAMLINES: These are tangent to the instantaneous velocity field.  For a rolling rigid body, the motion is always circular about the instantaneous center of rotation at the bottom of the wheel. Accordingly, this image shows the streamlines at various points in time as the disk rolls along: 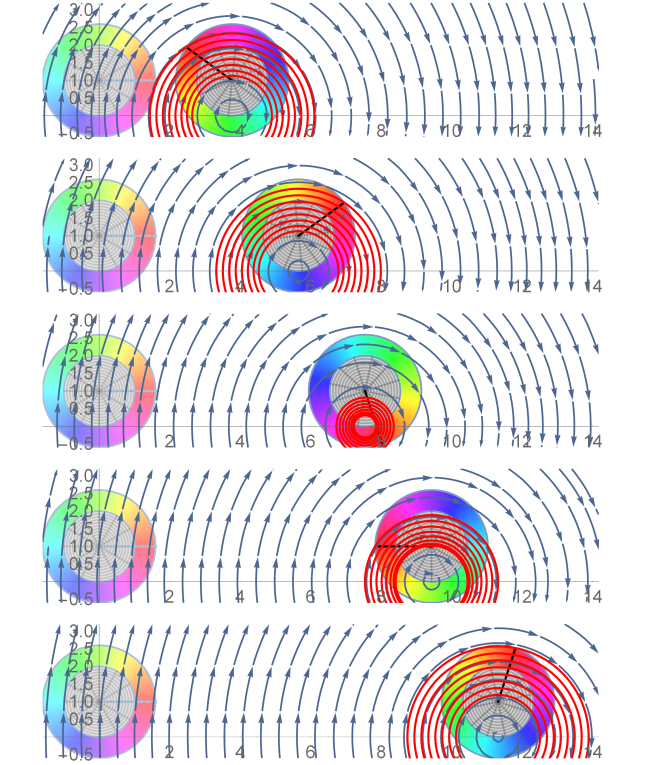 This image of streamlines is drawn not just on the body itself but also on its “virtual extension” in order to emphasize that (for rigid rolling) the instantaneous velocity is circular around the instantaneous center of rotation (bottom of the wheel). A particular set of streamlines is drawn in red. These are the ones that pass through a set of points that are evenly distributed on a spoke of the wheel (shown in black).

STREAKLINES: These are the lines you would see if a magic gremlin were to sit at a given location in space and “spraypaint” the material as it passes by.  Suppose that an assembly line of gremlins (located where you see the dots in the first image) are pointing their spray paint cans at the body while it rolls past. Then they would form the black streaklines shown here at various times: 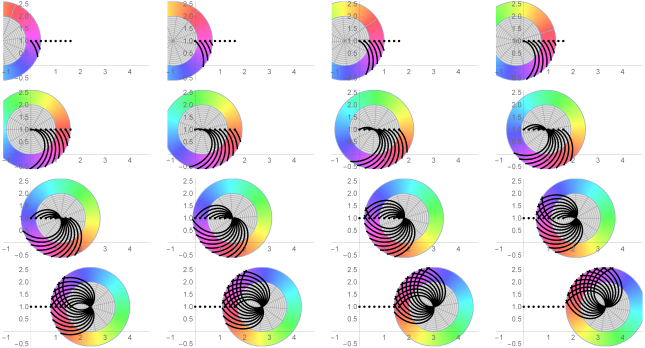 Important: The streaklines are made by gremlins who are sitting still and spraying material as it passes by.

PATHLINES: Are made by gremlins who “ride” with the material, spraying a record of where they have been (as if we were watching the rolling body from behind a window, and those whacky gremlins would spray paint onto the window as they pass by). Accordingly, here are the pathlines for group of gremlins who were initially coincident with the gremlins in the above streakline plot: 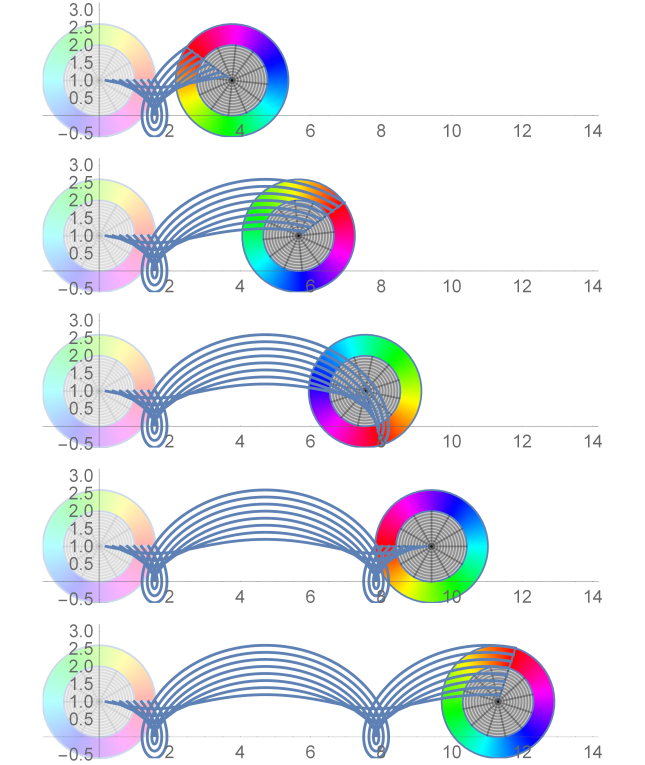 GRIDLINES are any set of lines that are painted on the body like tattoos. Such lines move with the body (like a tattoo).

END_OF_DOCUMENT_TOKEN_TO_BE_REPLACED

VibrationsHandNotes is a set of handwritten notes taken by Dr. Brannon when she was a student.

The Pi (or Pie) Plane showing the region of the principal solution for the Lode angle and hence the region nearest the max eigenvalue.

It probably isn’t surprising that an exact solution can be found for eigenvalues of a real 3×3 symmetric matrix.  This conclusion follows from noting that the characteristic equation is cubic, for which an exact solution procedure can be found in any good algebra reference.  One thing that you won’t find in many such resources, however, is an algorithm for the solution that will avoid complex numbers in the intermediate steps of the calculation whenever the components of the source symmetric 3×3 matrix are all real.

END_OF_DOCUMENT_TOKEN_TO_BE_REPLACED

You may download the rest of the document here

An overview book chapter of Computational Methods in Lagrangian and Eulerian Hydrocodes by David Benson.

When viewing these pdf documents, you may want to select “rotate pages” from the Document pull-down menu in Adobe acrobat reader.

FORTRAN source code for a program that computes all elastic constants when you give it any two independent ones.  END_OF_DOCUMENT_TOKEN_TO_BE_REPLACED

FORTRAN source code for a program that does simple pre-processing tasks, many of which are especially useful for converting fortran source code (e.g., changing all in-line comments to ANSI standard F77 style).

A very kewl mnemonic device for recalling thermodynamic identities (the Gibbsian relations, the Maxwell relations, the contact or Legendre transformations, etc.) I am working on a new version of this document that will clarify why property definitions for solids do NOT, in general, reduce to those for fluids when the tensors are isotropic. Stay tuned…